That means IE6 failed to be with going trend. Today situation of IE6 is like Dinosaur.

So, how does people around the world reacting on IE6’s failure?

1. The first such a campaign I encountered is .net Magazine’s “Bring Down IE6”. Craig Grannell of Bring Down IE6 movement asked designers and developers to unite “to take IE6 behind the shed and shoot it”. Article ‘Calling time on IE6’ is showing strong reasons to call off the IE6 usage forever and urging you and me to educate our colleagues, users and clients about calling time on IE6.

Bring Down IE6 movement is not confined to only campaign. It is already happened and trend has been seen at Information Tech Biggies. Lets look: 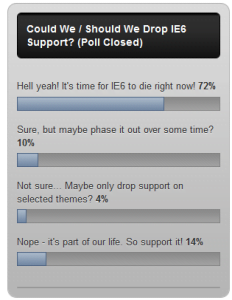 2. “The Browser for the Better Campaign“, a campaign run by Microsoft is another indication that the giant itself want that the IE user should upgrade to latest one.

3. “IE6 No More” is another such a site providing different language code to show a custom message whenever your site is browsed by IE6.

4. “Shockingly Big IE6 Warning“ is a plug-in for WordPress user that shows a warning message alerting the user why it is bad to use IE6, the security risk and the bad compatibility of Web Standards.

5. Beside the above bring down IE6 movement, SaveIE6.com is moving towards to save IE6 and asking signed petition, showing different reasons and graphical data such as Browser comparison table, reasons why you should use IE6, etc. Amazingly the site gathered good number (1,448) of petition.