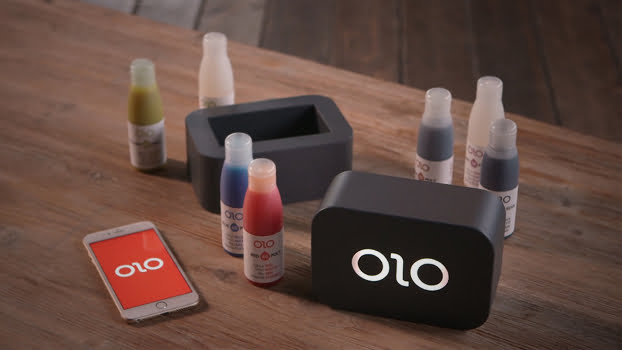 Do you have Smartphone? and Do you Want to print 3D Objects?

Then, a printer is one the way that will let you print 3D object just from your Smartphone.

How much that 3D printer will cost?

OLO – The First Ever Smartphone 3D Printer, the most affordable and the most hyped $99 3D printer is on Kickstarter from March 21st, 2016 for crowdfunding and has reached its funding goal in less than two days.

Imagine being able to print 3D objects directly from your smartphone …for just $99. That’s the reality of OLO!

OLO made its debut in New York in October 2015, when it won the World Maker Faire Editor’s Choice Award. It has since received astonishing reviews from all over the world.

OLO’s technology is simple – yet brilliant – because half of its hardware is already in our pockets, making it easy for anyone to print in 3D. And because there are more than 2.2 billion smartphone users, OLO is not just a device, it’s not just a 3D printer, it’s a game changer.

OLO’s team has been hard at work for 2 years perfecting the case, reinventing mechanics, reengineering micro-chips: the final result is a beautiful and portable design that is easy to use at a fraction of the cost of any other 3D printer on the market. OLO is made of only 7 plastic parts, one chip, and one motor.

OLO introduces a completely new line of materials called Daylight Resins, which harden under the white light of a smartphone screen. Its case was designed specifically to filter out all harmful external light to maximize the precision of the print, which can reach the incredible 42 micron resolution.

OLO is extremely portable, weighing just over a pound. Its light weight and compact size allows anyone to take it with them in a bag, in a backpack, or in its custom neoprene OLO pro-pack. Despite its small size, OLO allows 400 cubic centimeters of printing volume, and can fit almost any phone, including the large iPhone 6S+ and Galaxy A7.

OLO’s battery-powered motors give it the freedom to print anywhere, without the worry of needing to recharge. Just 4 AA batteries will last you at least 100 prints.

OLO has a virtually noiseless mechanism, allowing its use at any time, even while you sleep. OLO, since its conception, was designed to be used by everyone. All you need to do is select your model, pour in the resin, and let OLO do the rest! You can launch your first print within 10 minutes of unpacking your OLO.

OLO, at the same time, can be used by professionals: the high accuracy combined with the wide variety of materials allows OLO to be used for almost any application, from prototypes to many end-use parts. Materials include hard, flexible, translucent, colored, and even castable resins. With OLO, you will never waste a drop of material: the resin not used to print a part is completely reusable.

OLO’s app works on iOS, Android, and Windows devices. It is also compatible with a variety of free 3D software. You can use 3D scanning apps such as Autodesk 123D Catch, or any modeling software to design your own custom part.

OLO also adds a social aspect to 3D printing. It is the first 3d printer to introduce OLO 3D MESSAGE, through which creations can be shared privately between friends, right from within the app. Users can also choose to send messages in “surprise mode,” where the contents will only be revealed once it is printed.

OLO was designed with some incredible features:

OLO 3D inc. is based on the professional experience of a team with over 15 years in product engineering and more than 1200 products. OLO has become a reality thanks to its product designers, engineers, software developers, ux designers, and production experts working together.