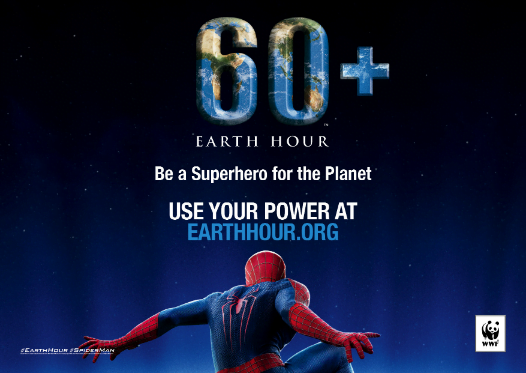 Coming this hot season SpiderMan and EarthHour going to rush over the street to save our planet from unforeseen miscreants. Show-off your support and “Use your Power on 29 Mar 2014” for the brand new Earth Hour Blue campaign. Join millions of people across the world who switch lights off for an hour – to raise awareness for the planet.

Earth Hour is a global environmental movement of WWF. As one of the first opensourced environmental campaigns, Earth Hour has grown from a symbolic event in one city into a global movement, crowdsourcing actions from individuals, businesses, organizations and governments to generate environmental outcomes. In 2014, Earth Hour Blue sees the movement enter the most exciting stage of its evolution, to be at the forefront of crowdfunding and crowdsourcing for causes, innovation and creativity for the planet.

WWF is one of the world’s largest and most respected independent conservation organizations, with almost five million supporters and a global network active in more than 100 countries. WWF’s mission is to stop the degradation of the earth’s natural environment and to build a future in which humans live in harmony with nature, by conserving the world’s biological diversity, ensuring that the use of renewable natural resources is sustainable, and promoting the reduction of pollution and wasteful consumption.